Geothermal energy, one of the renewable forms of energy today is one that takes advantage of heat beneath the earth’s surface. Deep down in the earth’s crust, there is molten magma (melted rocks) resulting from extreme heat. This heat is able to heat up air spaces and underground water reservoirs. Temperatures 10-15ft below ground level are about 50oF and 60oF year-round, but a lot hotter as it goes further down.

Geothermal installations come in two ways. One is smaller and simpler in nature, also known as ‘Direct Use’, where tubes are drilled down to the water table to tap hot water that is used in homes and offices. In some cases, pumps are used to pull the hot water that is used to warm power air heating systems in colder climates. This kind of geothermal delivery accounts for about 70% of its use, whiles about 30% accounts for it use as electricity.

The other way is a bit larger in scale, where water is sent deeper into the ground in tubes. (see illustration below) 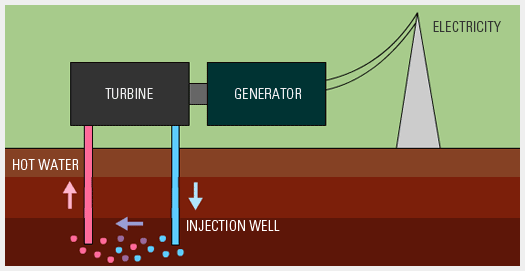 As the water passes through a network of underground tubes, it is heated up and the steam is tapped to turn turbines to generate electricity. This kind is more successful in areas with hotter underground temperatures, especially in active or geologically young volcano areas. These areas tend to have more fault lines and shallow tectonic plates, which allow more heat from the deep underground to get to the surface.

Geothermal energy is not one of the main sources of renewable energy in the USA, even though it has the leading geothermal capacity in the world. In fact, the sector produced only about 3,000 MW of electricity in 2010, making up less than 1% of the energy from renewable sources. Geothermal installations in the USA can be found in the West, Hawaii and Alaska. About 80% of all geothermal installations can be found in California.

“Although there are limited data available on recent growth in direct use of geothermal energy, output is known to have grown by an average of 10% annually from 2005 through to 2010; much of that growth was attributed to ground-source heat pumps, which experienced an average annual growth of 20%” Source: Renewables 2013, Global Status Report

Geothermal-generated electricity was first produced in 1904, at Larderello, Italy. In Europe, Iceland, Italy, Turkey and France are the leaders in the technology.