If you park your car outside on a hot sunny day with all the windows up, what happens? You notice it is very hot inside. That is simply because some of the heat energy from the sun that got into it by radiation could not escape because of the closed windows.

The earth’s atmosphere works in a similar way. The atmosphere is a blanket of gases that help regulate the earth’s surface temperatures. Typically the atmosphere is a mixture of gas molecules and some particles together called air. Some of these gases include nitrogen (78%), Oxygen (21%), Argon (.9%) and water vapor, carbon dioxide and a couple more making up the rest. It also contains lots of solid particles of dust, soot, pollen and other pollutants. 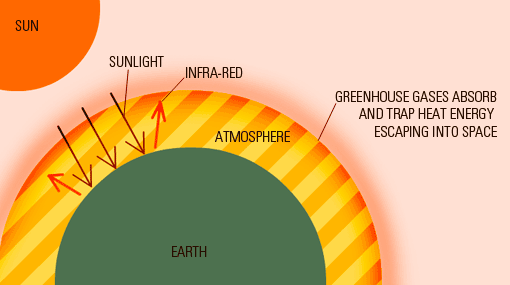 There is a natural balance between the incoming solar radiation and outgoing infra-red radiation from the earth. The measure of the forced change or stray-away from the natural equilibrium is what we call ‘Radiative Forcing’