1. Human Health
We all drink water that comes from a source: this may be a lake or local river. In countries that have poor screening and purification practices, people often get water-borne disease outbreaks such as cholera and tuberculosis. Every year, there are an estimated 3–5 million cholera cases and 100,000–120,000 deaths due to cholera. (WHO estimates that only 5–10% of cases are officially reported.)
In developed countries, even where there are better purification methods, people still suffer from the health effects of water pollution. Take toxins emitted by algae growth for instance: this can cause stomach aches and rashes. Excess nitrogen in drinking water also poses serious risks to infants. EPA’s 2010 National 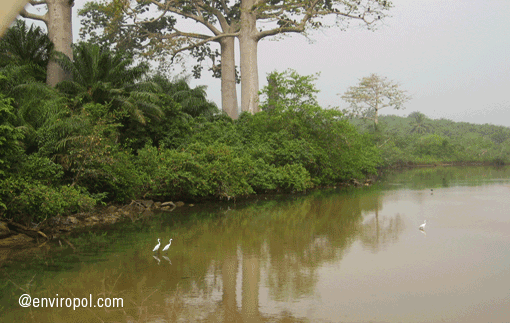 Nutrient pollution from upstream (creeks and streams) often flow downhill and even travel miles into other larger water bodies. The effect is that, it breeds algae growth and causes the growth of many more water organism. This algae attack affects fish and other aquatic animals by absorbing and reducing their oxygen supply. Algae growth also clogs fish gills. Naturally, the order of ecosystems in that water are affected negatively, as the destruction or introduction of any foreign organism alter the entire food chain in there.

3. Death of animals
Animals, including water animals die when water is poisoned for various reasons. Other animals are stressed and their populations are endangered. In a classic case of marine pollution in recent time, 16000 miles of a US coastline was affected by an oil spill. That water pollution caused a lot of damage and deaths of many animals. Over 8,000 animals (birds, turtles, mammals) were reported dead just 6 months after the spill, including many that are already on the endangered species list. Immediate impact on the wildlife includes oil-coated birds and sea turtles, mammal ingestion of oil, and dead or dying deep-sea coral2. Animals are also affected by solid waste thrown into water bodies, as they harm them in many ways.

4. Economic cost
From the above it is evident that there is some real financial implications that will result from water pollution. It can cost a lot more to purify drinking water that takes its source from nutrient-polluted water bodies. Fishing stock is affected negatively when there is a depletion of oxygen. Consumers are also wary of fish from these sources and tend to stay away from them, costing fisheries to lose revenue. In places where there are water activities or sports, lots of money is spent to clean up the water from algae blooms and the like. The U.S. tourism industry loses close to $1 billion each year, mostly from losses in fishing and recreational activities because of nutrient-polluted water bodies. In Mississippi alone, tourism in the three counties that border the Gulf Coast accounts for about $1.6 billion in visitor expenditures, 32 percent of state travel and tourism tax revenues, and 24,000 direct jobs3.