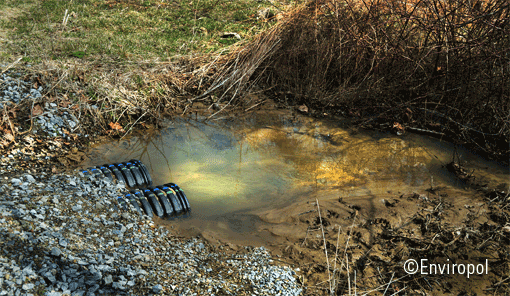 The causes of water pollution are directly related to the type of water pollution in question. Pollutants may be natural or human-caused and may include contaminants that can affect water quality such as nutrients, sediments, organochlorines, heavy metals, oil and hydrocarbons, chemical constituents and pathogens.

This is when a water body has a lot of pollutants containing nutrients thrown into it in a way that increases algae and plant growth in the water.  This hurts animal life in that water because soon, the massive growth of algae consumes all the oxygen in the water, starving other animal life. Eutrophication is caused by increased application of fertilizers, waste from animal and households, as well as land clearing for agricultural purposes. Eutrophication is common in estuaries, but with the recent increase in global temperatures, there is a threat that the effect will be felt in the oceans to which the estuaries are connected.

This results from poor treatment of human sewage as well as poor treatment of sewage from large or industrial farms such as those found in Upper Uruguay. The pathogens in microbial pollution are a major health hazard, especially in areas with poor drinking water treatment.

Poor waste disposal activities are probably the culprit here. Visit beaches and water recreational joints to witness all sorts of rubbish piles washed ashore by the water. This is not only a horrible sight, but also cause harm to humans and animals as well. The trans-boundary effect of this makes it worse, as the rubbish can be transported thousands of miles from one place to the other. In addition to locally produced solid waste, an estimated 700 000 tonnes of solid waste is generated annually by the 35 million tourists who visit the Caribbean, many on cruise liners1.

Agricultural run-off, municipal waste discharges, mining and industrial discharges, landfills and atmospheric transport add up to a massive occurrence of chemicals being discharged into water bodies. Persistent organic pollutants such as furans and dioxins, as well as heavy metals like mercury and cadmium can be transported over long distances when dissolved in water. Large-scale pesticides applied to sugarcane on plantations in Central America have had negative effects on the health of people there and is believed to have resulted in reduced fish stocks in the Nicoya Gulf of Costa Rica.

Oil drilling, refining and transportation have long been a major issue, especially with marine pollution. We depend so much on oil that it is hard to put in place very tough controls to prevent it. Oil spills from tankers and vessels cause a lot of short and long-term harm to water life. Nearly 5000 oil spills in the Niger River delta were reported between 1976 and 1996, releasing nearly 375,000 tonnes of oil in total. This has resulted in groundwater contamination and a loss of biodiversity in the vicinity of oil installations2. In recent time, there has been some genuine concern about ‘fracking’ as a process of shale gas extraction. Read more here: Concerns about Fracking (Hydraulic Fracturing)