Forests are more than just a collection of trees. They are more of a complex interaction of trees (vegetation) and animals (insects, birds and water life) with their abiotic environment such as water, air, soil and rock types existing in them. In the context of this article, we shall be focusing more on trees. Trees once occupied about 50% of the total land area of the planet. Today, the total forest area as of 2010 was estimated to be 4 billion hectares or 31% of the total land area. Out of this total, about 53% of it is distributed among 5 countries including the Russian Federation, Brazil, Canada, the USA and China. —Global Forest Resources Assessment 2010, FAO 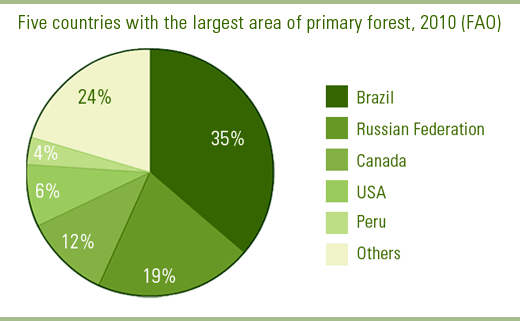 Forests come in many forms and types but have very similar functions in terms of its support for life forms, economic contribution and overall well-being of the planet.

The Amazon Forest, is the greatest of the rainforests, mainly covering Brazil, but spreading over to Bolivia, Peru, Ecuador, Colombia, Venezuela, Guyana, Suriname and French Guiana, an overseas territory of France.
The area contains:

Our forests are a natural wonder, with immense benefits, but face a huge threat of extinction in the past few decades. Data collected for FRA 2010 show a continued positive trend in efforts to conserve forest biological diversity, as measured by quantitative indicators such as the area of forest designated primarily for the conservation of biological diversity and the area of forest in protected areas, which are both steadily increasing. However, the area of primary forest continues to decline.