Lagoon Energy: Clean and cheap for more than 100 years!

Countries with the sea as part of their boundaries will fancy the clean energy idea that the UK government is putting across. It is believed to be the world’s first lagoon power plant. What is that about?

They intend to build a massive retaining wall, stretching for about five miles and about 2 miles into the sea to create a lagoon and tap tidal energy. As long as there are the sun and the rotation of the earth, there will be low and high tide—very predictable, just like the sun, right? A planning application will be made in 2017 and they could be enjoying the ‘clean fruits’ by 2022.

But why hasn’t this been done earlier, or why are all coastal countries not already doing this? The answer is simple. Clean energy itself is a fairly recent idea, as we have for many decades depended on fossil fuels, which is believed to be our major atmospheric carbon contributor. More so, hydro-power, solar and wind have been used and investors feel more comfortable spending in that area instead.

The figures that come up with tapping tidal energy is scary, partly because it is a new technology and has not started enjoying economies of scale yet. The UK Swansea Lagoon idea is estimated to cost about 1B GBP. This is expected to power about 155,000 homes. This is part of a six-lagoon project all estimated to be about 30B GBP—that serious investment, right?

Apart from the cost, there may be some environmental issues that may come with it. People feel it will affect fish and other sea animals in that area, as they may get caught or snapped by the shafts in the wall.

We need clean energy, so if that will do the trick, the people who will benefit from this move should welcome it, and other coastal countries can take a clue.

Here is how the tidal energy will be captured from the lagoon. 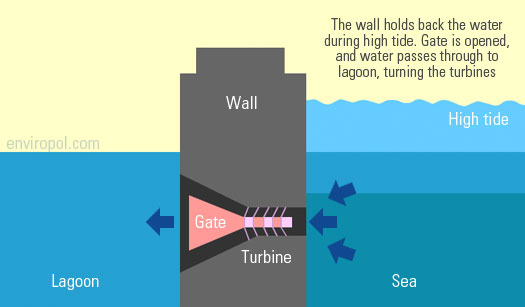 Strong retaining walls are erected deep into the sea to create the lagoon. In the walls, there are gates with rotating shafts. During high tide, the gates are closed and the walls hold back the water. With its level rising, the pressure in the water increases too. The gates are then opened and the swiftly flowing water (moving through the gates into the lagoon) turns the turbines to generate power. During low tide, the reverse happens, releasing the water back into the sea.

The concept is pretty simple, but there is a whole lot of engineering, planning and cost that go into it. As long as there is a need for energy, it won’t be long before the initial investment is covered.